Miguel Cabrera: Everything you ever wanted to know about his 500 home runs - Detroit Free Press 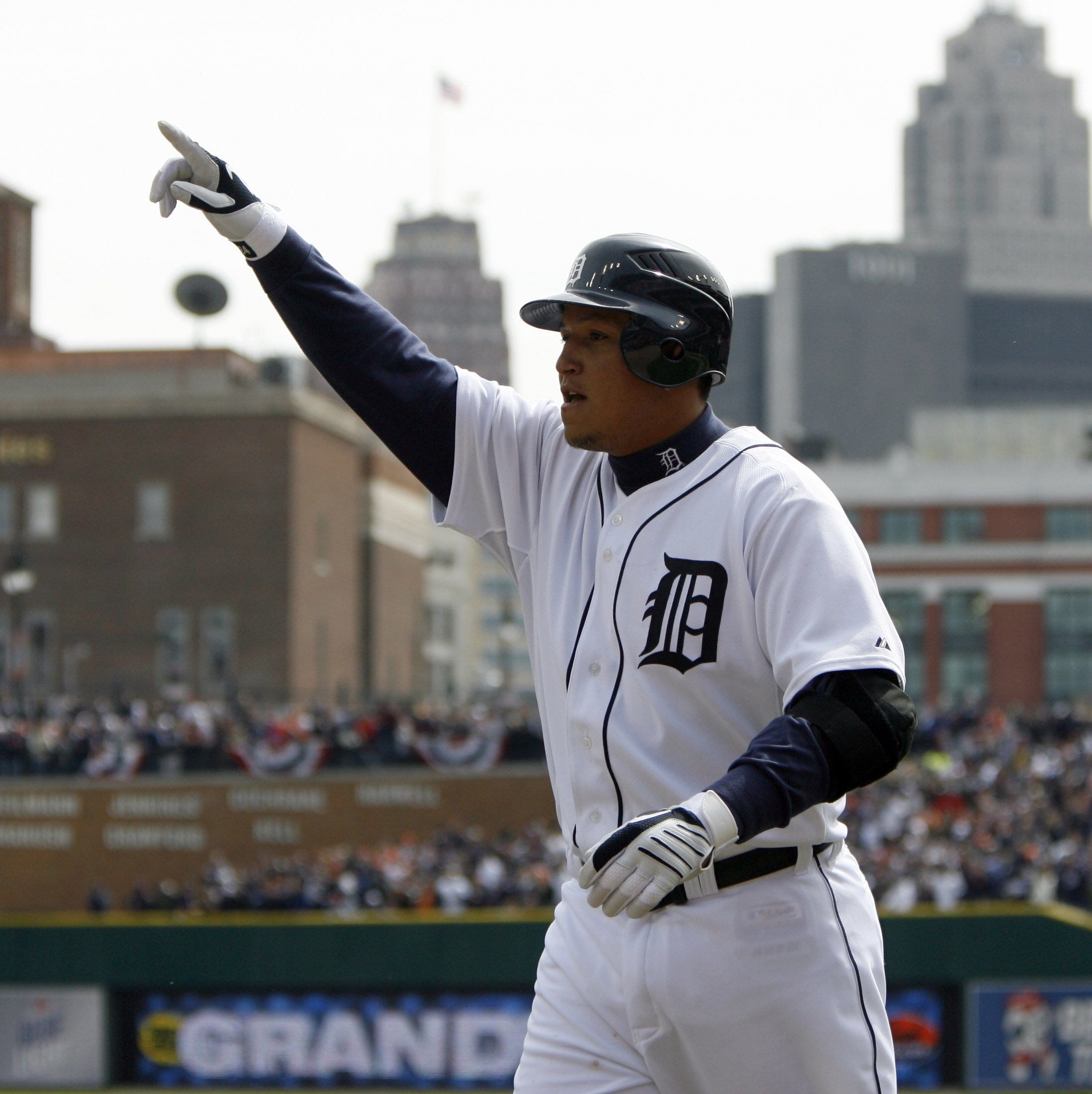 When Miguel Cabrera went deep for his 500th career home run Sunday afternoon in Toronto, it was an epic achievement, and one that can be difficult to fully fathom.

First, there’s the sheer exclusiveness of the club: Even with baseball’s offensive boom in the 21st century, Cabrera was still only the 28th player with 500 homers, and the first to reach the milestone since 2015.

Second, those 500 homers are a lot. To put it in perspective, the other 39 players on the Detroit Tigers’ 40-man roster as of Sunday's game (admittedly, a group that includes more than two dozen pitchers) have 416 career homers combined. No. 2 on the Tigers’ roster is Jonathan Schoop, an eight-year vet with 159 homers.

JEFF SEIDEL: Here’s why No. 500 means so much for Tigers

PRINCE ON THE KING: Fielder on Cabrera's 500 homers: 'One of the greatest of all time'

Like we said, let’s start with No. 1, and the milestone blasts thereafter:

No. 1: June 20, 2003 — Making his debut at 20 years, 63 days old, Cabrera launched the first pitch of his fifth at-bat — against Tampa Bay and reliever Al Levine — to deep center field for a walk-off homer in the 11th inning in Miami. (Levine, a future Tiger, gave up homers over his 10 seasons to five of the 28 members of the 500-homer club: Cabrera, Alex Rodriguez, Manny Ramirez, Frank Thomas and Jim Thome.)

No. 100:  Aug. 23, 2006 — In his 530th career game, Cabrera had two homers, with the second putting him at the century mark. It came in the third inning off Washington’s Chris Schroder with the bases empty.

No. 200: Aug. 23, 2009 — Two milestones in one! In career game No 1,000, Cabrera launched his third hit of the day in Oakland, off the first pitch from reliever Michael Wuertz, over the fence in right field.

No. 300: July 22, 2012 — Just under three years later, in game No. 1,447, Cabrera had another two-homer game, with both coming off Chicago White Sox starter Philip Humber in Detroit. Cabrera’s blast in the third inning was a solo shot to deep center on a 3-1 count with one out.

No. 400: May 16, 2015 — After another three years, in game No. 1,856, Cabrera hit his fourth home run in three days, going deep to, yep, center off the eighth pitch from Cardinals starter Tyler Lyons (on a full count) in the first inning in St. Louis.

Marlins: Signed by future Tigers execs Dave Dombrowski and Al Avila in 1999, Cabrera spent his first five seasons in Florida. He hit 138 homers wearing teal and black, 27.6% of his total, in 3,072 plate appearances (accounting for 28.3% of his total times at the plate).

500 ROAD:   Cabrera's journey from Venezuela to an epic milestone

The majority of Cabrera’s homers — just barely — have come on the road, with 252 (50.4%) as a visitor and 248 (49.6%) at home at Comerica Park in Detroit and Pro Player Park/Dolphin Stadium in Miami Gardens, Florida. Though, to be precise, Cabrera has 249 homers combined at the Tigers’ and Marlins’ home parks; that would include his lone homer hit on June 11, 2004, during the Marlins’ 2004 visit to Detroit.

And outside of the AL Central? Cabrera has found the friendliest confines in Baltimore, with 12 homers (2.4%) at Oriole Park at Camden Yards just edging out his 11 (2.2%) at the now-defunct Turner Field in Atlanta, his 10 (2%) at the version of Yankee Stadium which opened in 2009. (He also had two homers, one as a Marlin and one as a Tiger, at the previous Yankee Stadium.)

Oh, and while we’re on the topic of defunct stadiums, Cabrera has 108 homers — 21.6% — at parks no longer in use. That includes, of course, the 65 he hit at home as a Marlin — Miami moved into LoanDepot Park (and that is NOT a Marlins joke) in 2012. But it also includes: those 11 at Turner in Atlanta, eight in Texas’ Globe Life Park, five in Washington’s RFK Stadium, four in St. Louis’ previous Busch Stadium, three each in Minneapolis’ Metrodome, New York’s Shea Stadium and Estadio Hiram Bithorn of San Juan, Puerto Rico (thanks to the Expos’ short sojourn there), and two each in the previous Yankee Stadium, Montreal’s Olympic Stadium and Philadelphia’s Veterans Stadium.

Outside the division, Cabrera punished the East in both leagues, with 25 homers (5%) against Baltimore — all of them as a Tiger, including No. 499 on Aug. 11 — and 21 homers (4.2%) each against the Rays, Phillies and Nationals (including their time in Montreal).

His fewest homers by teams, by the way? Just the one aforementioned homer against the Tigers, two in 2016 against the Marlins and five each against the Padres and Reds.

WELCOME TO THE CLUB: How Cabrera stacks up with the other 500-homer hitters

Well, OK, we covered the space pretty well in the previous two sections. But the time?

And although we know that baseball is a game with no clock, it does have innings — and over his career, more have come in the first inning than any other, thanks to a career of hitting No. 3 in the batting order. (Just as 56.4% of his plate appearances have come in the three-hole, 56.4% — 282 — of his homers have come from that spot.) The breakdown by inning (with percentage in parentheses):

And just two of his 500 homers came on at-bats of 10 pitches or more: No. 43, back on Sept. 23, 2004, when he launched the 13th pitch he saw off the Phillies’ Vicente Padilla deep to center for a two-run blast and No. 210, on April 7, 2010. That homer came with the Tigers trailing the Royals, 1-0, with two outs in the ninth inning in Kansas City; on the 10th pitch — on a 2-2 count thanks to five two-strike foul balls — from future teammate Joakim Soria, Cabrera sent the ball down the line the opposite way, off the foul pole, to tie the game.

Of course, sometimes there’s no place to put Cabrera; in 224 plate appearances with the bases loaded, he has six homers. The slams:

That's impressive, but ... Cabrera actually ranks 28th in grand slams within the 500-homer club. Mel Ott and Mike Schmidt are just ahead of him, with seven slams (the same total as Brandon Inge), while Alex Rodriguez leads the pack with 25 (out of 697 homers).

If there is one category that is absolutely lopsided, it’s the handedness of the pitchers Cabrera has homered off of. More than three-quarters of his homers — 392, or 78.4% — have come off right-handed pitchers. (And yet, No. 500 came off left-hander Steven Matz.) This is more of a function of the pitchers Cabrera has faced: 76.2% of his plate appearances have come against righties.

Likewise, four of the seven pitchers who have allowed at least four homers to Cabrera — Phil Hughes is tops at seven (1.4%), followed by Corey Kluber (six, 1.2%), James Shields (four, 0.8%) and Jeremy Guthrie (four, 0.8%) — are righthanded.  Bruce Chen tops the lefties with five allowed (1%) and Chris Capuano and Chris Sale have each allowed four (0.8%).

Even those seven most-frequent victims only account for 6.8% of Cabrera’s homers. That’s because Cabrera has homered off 346 different pitchers, from Matz on Sunday all the way back to Al Levine on that June 2003 night in Miami.

Back to the big picture

So what’s the quintessential Cabrera homer? His first? His 500th? The 10-pitch blast off Soria? The lone homer off the Tigers, off Gary Knotts on June 11, 2004?

For our money, it’s a trio of dingers on May 28, 2010, against Oakland at Comerica Park — one of two three-homer games in Cabrera’s career. (The other came a little bit less than three years later, on May 19, 2013, against the Rangers in Texas.)

In that late-May game against the A’s — after missing a couple of games for the birth of his daughter — Cabrera launched the first pitch he saw from right-hander Ben Sheets in the first inning into right-center for a two-run homer. In the fourth, Cabrera took Sheets’ second pitch down the left-field line for a solo home run and a tie game. Finally, in the bottom of the ninth, Cabrera sent righty reliever Andrew Bailey’s third pitch over the bullpens in left to make it a one-run game (though that was as close as the Tigers got).

Six pitches, three homers, using the whole field — and not quite enough runners on base in front of him to get the win. That’s peak Miguel Cabrera right there.